Monogrammed headboards, slipcovered desks and tufted velvet storage ottomans are part of dorm living these days if you believe everything you see online. A quick perusal of Pinterest and TikTok reveals a lot of silliness and over-the-top décor, but there’s nothing unreasonable about the desire for a comfortable space of […]

Monogrammed headboards, slipcovered desks and tufted velvet storage ottomans are part of dorm living these days if you believe everything you see online. A quick perusal of Pinterest and TikTok reveals a lot of silliness and over-the-top décor, but there’s nothing unreasonable about the desire for a comfortable space of one’s own. Just ask Virginia Woolf.

Gone are the days when a mold-free shower caddy and a fresh pair of flip flops were the only luxuries required for communal living. Dorm room outfitting has expanded in scope and sophistication and become big business. This year U.S. college students and their families will spend roughly $10 billion on dorm or apartment furnishings, according to a report published by the National Retail Federation.

Individually, families with college students will spend an average of $1,200 on back-to-school purchases including electronics, clothing and dorm essentials. That’s a sizable chunk of change, but with a little planning and creativity, there’s no need to break the bank.

Kristie Higdon, owner of Project Great Spaces, an Evanston design firm, recalled arriving on campus for her freshman year armed with nothing but a drab bedspread. “The dorm room felt like a jail cell,” she said. “If I had spent just a little money on a few things to liven the place up, it could have been so much better.”

Kate Suvari, an ETHS graduate bound for the University of California in Berkeley, will be better prepared than Higdon was. She met her roommate at an admitted student event in the spring and said one of the first things they discussed was decorating the room.

“We just want to create a space that is kind of peaceful and calm,” said Suvari, who anticipates a certain amount of stress with the transition to college coursework.

As a mood enhancer, Higdon advises that kids select a palette that is pleasing to them but said they shouldn’t shy away from bold colors like orange and turquoise.

“I think pink is way overdone in dorm rooms,” she said. “The bright colors are going to make the room happier. Kids can handle those colors because they are young and high energy. It may not be what you’d want in a kitchen you’ll be in for 30 years, but you’re only in the dorm for two semesters.”

Honor Michel, another recent ETHS graduate who will study at the Pratt Institute in Brooklyn, N.Y. this fall, said she has not selected a palette for her room yet, but knows what will go on her walls.

“My roommate and I are both artistic,” she said, “so we’d really like to fill it with our own work. I feel it’s important that we have a place that reflects our art.” Michel plans to focus on film, but also enjoys sketching and drawing.

She said they may add a wall featuring Polaroid head shots of individual visitors, an idea she discovered on Pinterest. “Everyone who comes in the room puts on the same hat or glasses and then you take their picture.”

Inexpensive tapestries, Higdon suggested, are another easy antidote to bare, cold walls and can also serve as a room divider or privacy screen in a pinch. Pottery Barn Teen and Urban Outfitters, she noted, are great resources.

No matter what goes on the walls, Higdon emphasized the need for good lighting. “I think lighting is super important in these spaces because they are so dingy.”

She recommends tall floor lamps to brighten dark corners as well as task and table lamps.

Fairy lights are a must-have accessory for many dorm dwellers. Michel plans to hang a few strands in her room and will also plug in a couple of salt crystal lamps, which sellers say improve air quality and enhance positive energy.

Suvari was disappointed to learn that fairy lights are banned as a fire hazard by University of California. To add an alternative festive glimmer, her roommate is bringing a floor lamp that projects an image of a starry night sky on the ceiling.

Good lighting and unique artwork are part of creating a livable inviting space, but there is also the decidedly less glamorous issue of storage. The real challenge, Suvari pointed out, is the obvious lack of space. “How do you make [your room] homey,” she said, “without cluttering the space?”

Higdon has ideas. “Smart storage in a small space means that every inch is utilized and that means vertical solutions.” Stylish shelving ladders available in bright colors on Wayfair and Amazon are portable and can be tucked into a corner. Shorter lightweight shelving units from Ikea can be erected on a desktop.

Michel plans to bring a free-standing clothing rack from her room at home to double her hanging space at school. Suvari has purchased a set of multi-layered hangers from Amazon, but is unsure of her room dimensions, so will have to source other storage options locally.

Once their stuff is stashed, both freshmen would like to incorporate a bit of greenery into their décor. “There’s a cute plant shop right by our dorm,” said Michel “and we have two giant windows which is really nice. Hanging plants add a lot of dimension.” Suvari admitted that she is not entirely confident in her plant-tending skills and may resort to artificial options.

Even if kids lack a green thumb, said Higdon, there are plenty of easy choices. “You can do succulents, and there are all kinds of house plants that you really cannot kill. I think that kids probably benefit from having some small amount of responsibility in caring for something living.”

Fri Aug 12 , 2022
Some people inherit blue eyes or curly hair from their relatives. California native Hannah Dahl’s family passed down a different kind of trait: The power to commit to a theme. “My grandma’s house is all purple and green: The carpet is green, the walls are purple, the sofa is green […] 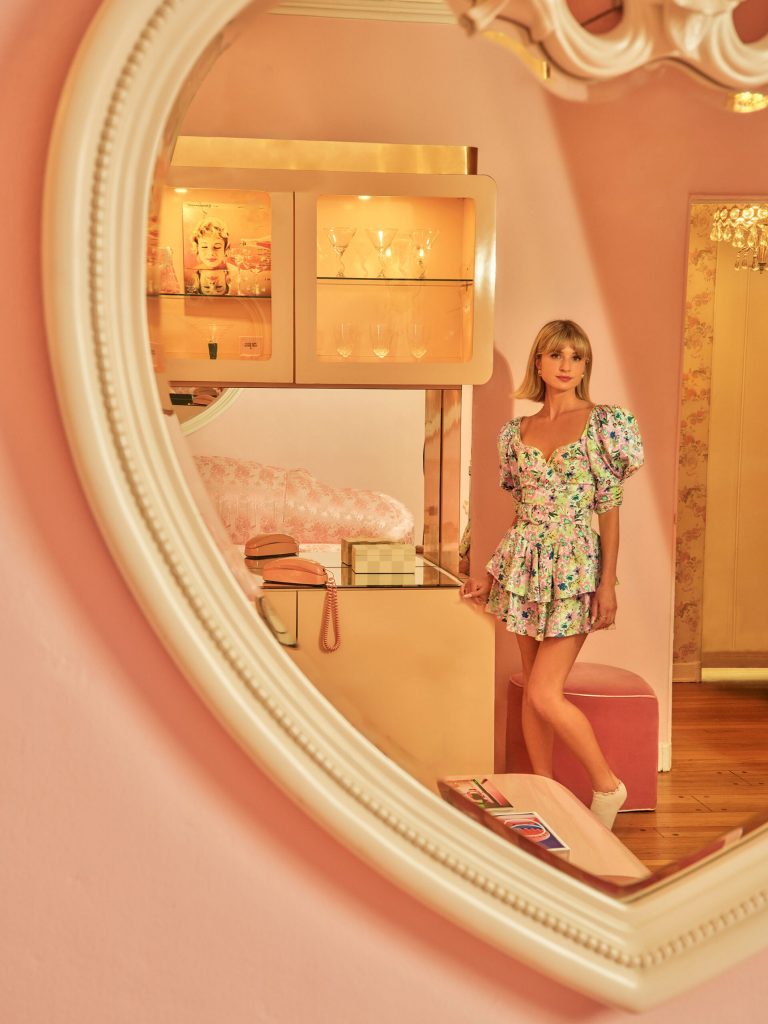