NCC-1701. No bloody A, B, C, or D. The Enterprise is probably the most famous spaceship in fiction. But what’s the true story behind it? Long before Castiel first appears in the fourth season of Supernatural, the CW series already has three main characters. There’s the Winchesters, Sam and Dean, […]

NCC-1701. No bloody A, B, C, or D. The Enterprise is probably the most famous spaceship in fiction. But what’s the true story behind it?

Long before Castiel first appears in the fourth season of Supernatural, the CW series already has three main characters. There’s the Winchesters, Sam and Dean, but there’s also the 1967 Chevrolet Impala. Dean’s “baby” is as much a character as the two brothers. They speak through words, and the car speaks through the soundtrack.

And long before Sam and Dean fought evil and hunted things (a.k.a. the family business), a bevy of Starfleet captains communed with their truest love – the NCC-1701 Enterprise. In the original Star Trek pilot episode “The Cage” the Enterprise is there. In fact, other than Mister Spock, the only character to survive that initial pilot is the Enterprise herself.

And there’s a lot to talk about when it comes to the Enterprise – her design, her history, and her adventures. So here’s everything you need to know about the original (in TV transmission terms) Enterprise. The Man Behind The Enterprise

When people talk about the creation of Star Trek, obviously the first name that most think of is the show’s creator Gene Roddenberry. But there’s no Star Trek without the art and production designer. And the name behind the initial designs for so much of Star Trek, the Enterprise included, is Matthew “Jeff” Jeffries.

Jeffries finds himself in an unenviable position working under Gene Roddenberry (even though they get on famously). Roddenberry doesn’t know what he wants in an Enterprise design. He just knows what he doesn’t want – no rockets, jets or anything else reminiscent of 1960s science fiction. So together with original art director Patricio Guzman, Jeffries starts throwing up walls full of design ideas. Roddenberry connects with none of them, at least not entirely.

The idea that Jeffries really rallies his design concept behind is the warp drive. Faster than warp travel requires (at least in theory) a design that can move quickly and have unbelievably powerful engines.

So, after playing with a ball and then a ring-shaped design, Jeffries lands on this combination of a saucer combined with those massive warp nacelles. The engines are set far apart from the ship because of their power and they and the saucer are connected with a hull – and voila! The Enterprise is born. 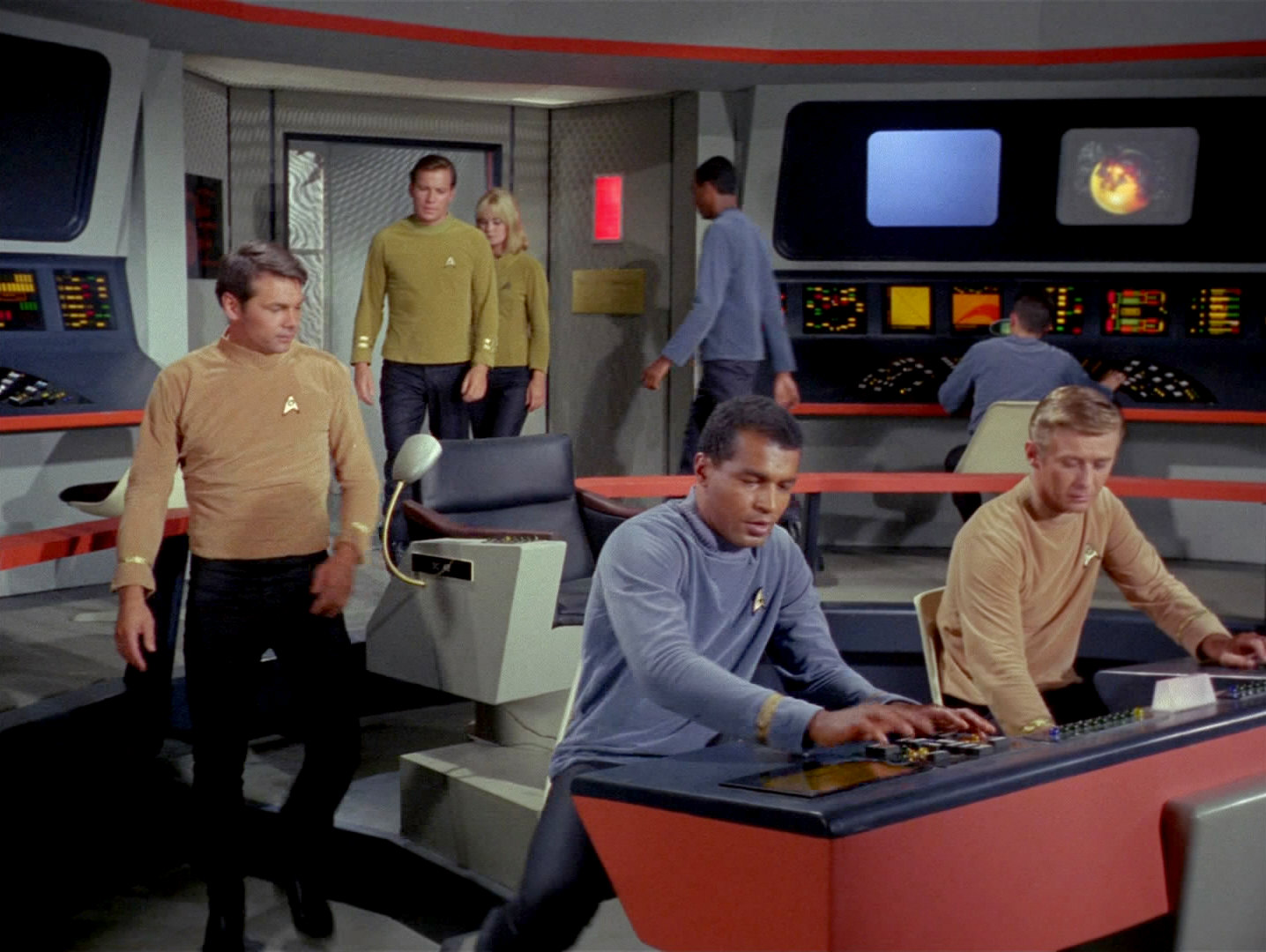 The most important part of the Enterprise design, outside of its exterior, is the bridge set. Since it’s housed in the top of the saucer section, obviously the bridge is circular in shape, but what else goes into making the Enterprise bridge so iconic?

Obviously, the consoles and viewscreen with the Captain’s chair at the center make for the core of the bridge design. But one of the most interesting parts of the aesthetic comes from Roddenberry writing to Guzman about a trip to the North American´s Advanced Space Research Center. In addition to musing on the notion of large lights, buttons, and dials, there is also a notion of the importance of computers on the bridge.

Initially, the idea is to house an enormous computer on the bridge full of all data available. However, in its place, we see Spock’s Library Computer Access and Retrieval System. Think of it: that device Spock stares into informs so much of Spock’s character and the ship’s design.

The USS Enterprise is built in the San Francisco shipyards but assembled in space. The NCC-1701 Enterprise has three captains during her time – Robert April, Christopher Pike, and James Kirk. April himself is responsible for overseeing much of the build of the ship. His wife, Sarah, oversees much of the medical bay design.

Lawrence “Larry” Marvick is one of the lead designers for Constitution class ships, of which the Enterprise is one. The ship’s computers are designed by Dr. Richard Daystrom, the man for whom the Daystrom Institute is named. The Enterprise has 22 decks and a bottom deck.

The ship goes through a number of refits over the years. After an A.I. system called Control runs amuck and neither ends all organic life in the universe, Pike retrofits the Enterprise removing any artificial intelligence and also abandoning holographic-based communication. When Kirk returns as captain during the events of Star Trek: The Motion Picture, the bridge, medical, and engineering see major overhauls and a number of deck layouts change entirely. 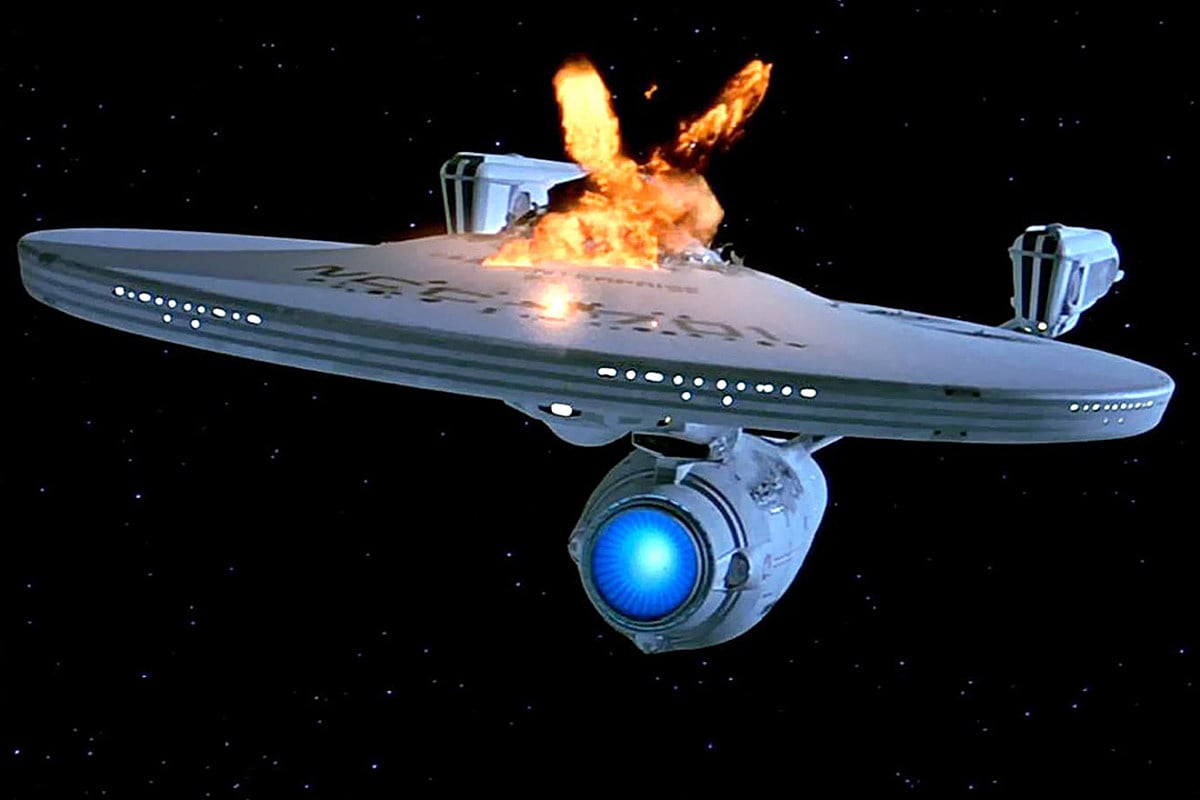 The Enterprise takes a lot of damage over the years, but never so much that it can never be repaired. In fact, for a long time, there’s even a bit of hull plating which remains through every retrofit. That bit of hull plating has signatures from officers and captains dating back to the ship’s earliest voyages.

However, all good things must come to an end. And after surviving V’GER and Khan, it’s Kirk’s oldest enemies the Klingons who essentially bring about the Enterprise’s destruction. After Commander Kruge kills Kirk’s only son David on the Genesis planet, he also sends his crew to invade and take over the Enterprise. Rather than allow that to happen, Kirk beams his crew off the ship leaving the interloping Klingons to inherit an Enterprise about to reach self-destruct.

On the Genesis planet below, Kirk and his crew watch the Enterprise burn up in the atmosphere as Kirk questions his actions. And while a new Enterprise-A eventually inherits the title, Kirk’s decision to sacrifice the ship brings an end to 40 years of service, from 2245 through 2285.

Lina is a 10+ year entertainment journalist veteran whose bylines include SYFY Wire, Looper, and Screen Fanatic. She has written comic scripts for IDW Comics and Zenescope Enetertainment and has written Doctor Who shorts for BBC Worldwide. She is a long-time podcast host and producer who has worked on Who Won the Week, SYFY’s Every Day series, and the Amazon podcast Untold Story. She currently co-hosts the New York Times recommended podcast Song vs Song.

Wed Sep 7 , 2022
Photos by Scott Amundson This 1949 European-inspired abode features walls of floor-to-ceiling windows that frame expansive views of Lake Minnetonka and the surrounding treescape. Well-traveled with sophisticated taste for European design and elegant vintage and antique furnishings, the empty nesters who bought this 1949 home on Lake Minnetonka always intended […] 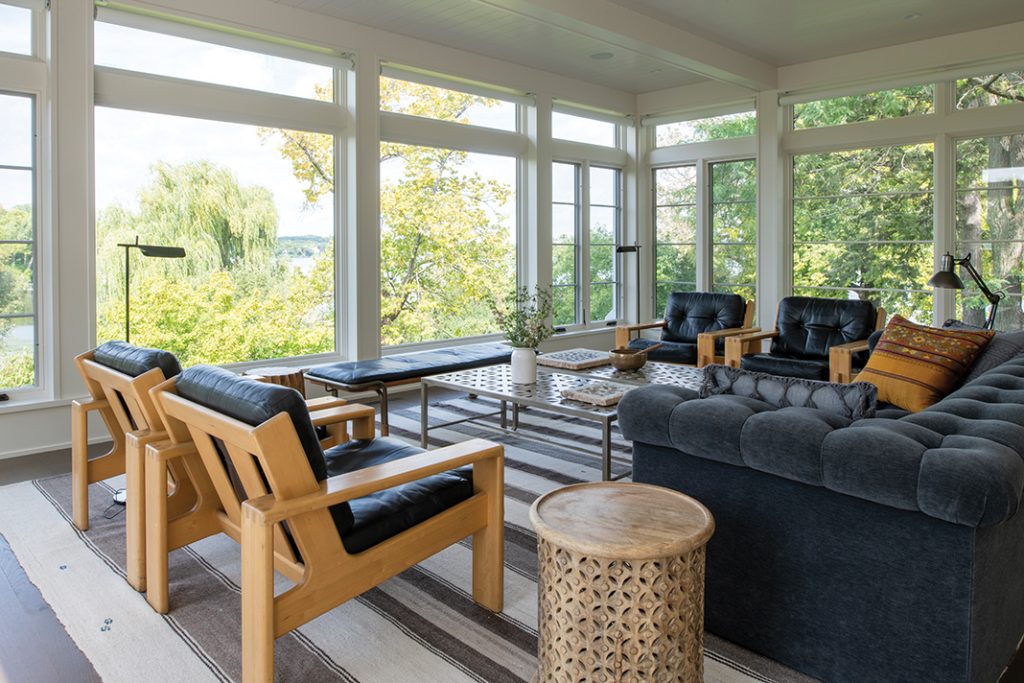