Redecorating houses for work is not foreign to director-and-producer couple EJ McLeavey-Fisher and Veronica Balta; they often create brand commercials in residential spaces that require tweaking everything from furniture to accessories to lighting. And yet they struggled with transforming their own home, a Colonial in Maplewood, New Jersey, “full of […]

Redecorating houses for work is not foreign to director-and-producer couple EJ McLeavey-Fisher and Veronica Balta; they often create brand commercials in residential spaces that require tweaking everything from furniture to accessories to lighting. And yet they struggled with transforming their own home, a Colonial in Maplewood, New Jersey, “full of good vibes and love.”

The New York City expats spent the beginning settling into their new suburban life, only painting a few rooms that felt “particularly off” (think: dark walls in the children’s spaces and beige everywhere else), but before they knew it, three years had passed. With jobs that require working from home while also raising their two daughters, Pearl (5) and Hannah (3), and a dog, designing intentional rooms with each person in mind was key. “EJ was like, ‘We’re going to be sitting here; we should be inspired by our home,” Balta recalls.

What initially started as a search for someone to help them display their extensive art collection (a logical first step) evolved into hiring the “Brooklyn West” designer Hollie Velten-Lattrell for a complete makeover of all the common spaces and the primary bedroom. Balta laughs as she remembers her cardinal directive to Velten-Lattrell: “I definitely told Hollie, ‘I do not live in a beige house,’ and she said, ‘No, you don’t.’” So began the couple’s crusade against boredom.

A joint desire for vibrancy—and to highlight the existing curves of the home—served as Velten-Lattrell’s creative anchor. “I saw the house in a circular movement. I thought a lot about sunscape palettes and solar rhythm…sunrise in the kitchen and bedroom, sunset in the living room, and night garden in the dining room, mimicking the day’s cycle,” she explains. Velten-Lattrell had her carpentry team craft custom built-ins with a similarly sinuous feel, inspired by a vintage piece with an Art Deco–meets-’80s vibe. All were finished with machine-sprayed paint for durability and minimalist hardware for a clean contrast to the oversize bends and waves.

Velten-Lattrell leveraged her background in dance, paying particular attention to the progression of walking through the rooms as though it were choreographed. By layering what she describes as “wild colors,” such as moody peach paint in the living room with wall-wrapping textiles like the botanical wallpaper and layered greens in the adjacent dining room, she created a smooth transition from late-afternoon sun to dusky night.

Understandably, McLeavey-Fisher and Balta were initially nervous about the prospect of colors so far from the traditional: “We wanted to honor the 100-year-old house,” notes Balta. Luckily, the shades they selected—yes, even Aperitivo Hour—have blended seamlessly into their lives. Balta acknowledges “everything looks great in front of it, but initially I thought to myself, Is this nuts?’” As true storytellers, the couple rounded out each space with intentional pieces, like the menagerie of animal art in their dining room and a folk dog chair from Van der Most Modern in Brooklyn (their pup is an omnipresent member of the family).

However, none of the pieces in their collection had ever been able to fill the stretch of negative space that is the primary bedroom’s oversize wall. So Velten-Lattrell nodded to curves there, swapping out the couple’s standard headboard for a bespoke quilted arch (underneath is foam and plywood), complete with reading sconces.

Of course, each room had to be as functional as it was transportive, especially for the children. The couple traded in their old dining table and chairs for a diner vibe, opting to create a custom built-in banquette with block-printed cushions. “The kids love hanging out there now,” says Balta. In the living room, the cabinets under the bespoke corner bookcase is also their domain. “I’ve been able to put away all of their little toys that were otherwise just kind of thrown around the living room. It helps them understand when Mommy’s like, ‘Clean up!’”

This is, of course, by design, although the spaces also leave room for the family to experiment. Velten-Lattrell describes her work like a dress rehearsal, “with a lot of costume and styling, but always with some undone or improvisational quality to it, to feel expressive and malleable.” Accessories can live here or there, and you’ll find an occasional empty shelf for the family to fill over time.

The couple gush over the array of interesting backdrops now available for their Zoom calls. Balta prefers the dining table because of the clear visual of the kids in the living room (“The wallpaper doesn’t hurt,” she adds), but McLeavey-Fisher is more fluid with his HQ. He says with a laugh, “I do a lot of stuff on the porch. It’s like, how important is the call that I’m getting on versus how loud can it be in the background?”

In between meetings, the pair dreams of doing it all over again one day. “We’re conditioned to think that any work on your home has to suck and be stressful,” says McLeavey-Fisher. “Whereas working with Hollie as people who are also in creative fields felt like a fun project that had the benefit of being our actual house that we get to enjoy afterward.” Until then, though, they’ll bask in the glow. 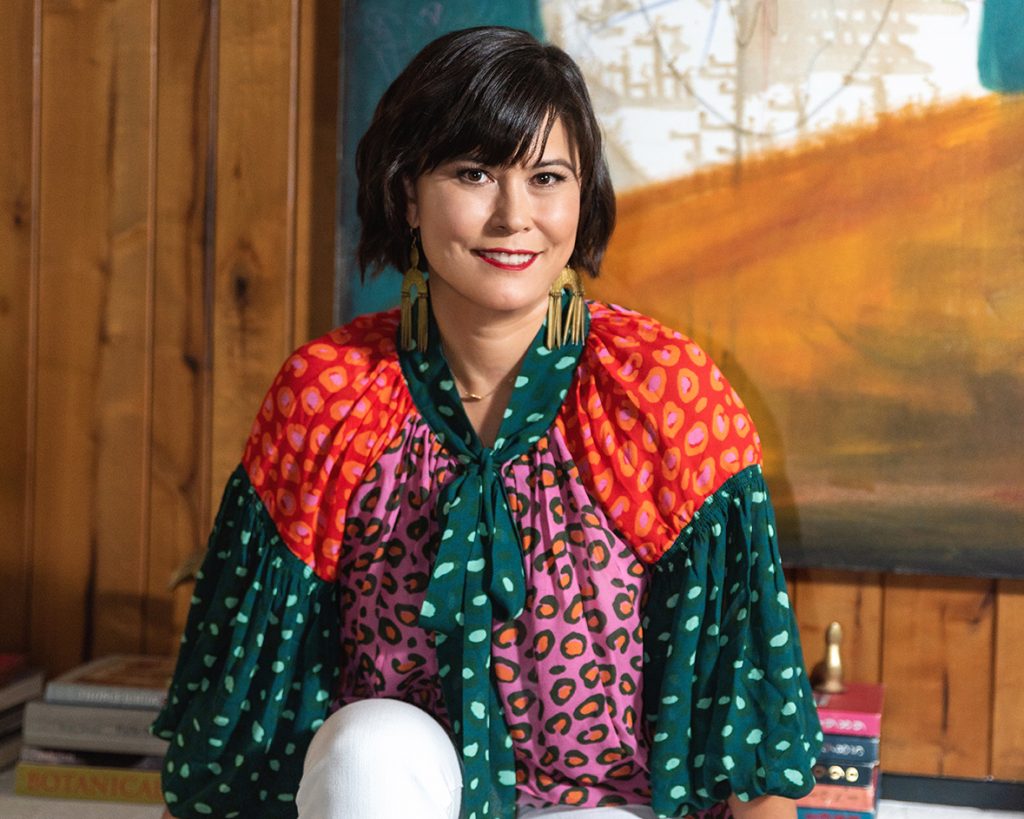